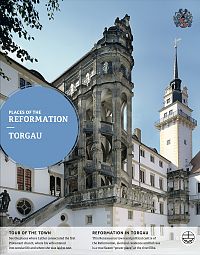 Torgau doubtlessly was the political centre of the Reformation, and its beautiful, spectacular Renaissance character has been kept until today. There hardly is another place in Germany that features such an entirely well-preserved constructional ensemble. In 1979, the town was granted heritage status.

At the end of the 15th century, John Frederick the Magnanimous expanded the splendid Renaissance-style Hartenfels Castle, creating impressive monuments like the Wendelstein spiral staircase and the first new construction of a Protestant church. At this castle, the Protestant princes signed the first treaties of protection, and shortly after, the Articles of Torgau, an important foundation of the Augsburg Confession, were drafted here.

Many of the old traditions are still alive, including the maintenance of Protestant church music, which was invented here by Johann Walter. This journal will give you some inspirations for your individual trip to this impressive town.