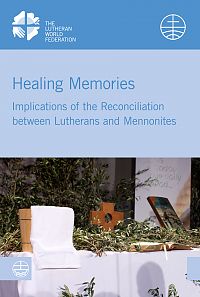 Implications of the Reconciliation between Lutherans and Mennonites
LWB-Studien / LWF Studies, 2/2016

The Lutheran World Federation and The World Mennonite Conference (Eds.)

Meeting in Stuttgart, Germany, in 2010, the Eleventh Assembly of the Lutheran World Federation (LWF) asked for forgiveness from members of the Anabaptist/Mennonite tradition for the wrongs going back to the beginnings of the Lutheran movement in the 16th century that had led to painful divisions between the two Christian families. The Mennonites accepted this apology and both communities committed themselves to move toward reconciliation. On the threshold of the 500th anniversary of the Reformation, this publication brings together two reports: »Healing Memories: ­Reconciling in Christ« by the Lutheran-Mennonite International Study Commission and »Bearing Fruit  Implications of the 2010 Reconciliation between Lutherans and Mennonites/Anabaptists« by the LWF Task Force on Mennonite Action.

What Does Theology Do, Actually?

Vol. 1: Observing Theology and the Transcultural